Do you feel you have you lost your creative self somewhere along the way? It’s a common experience and something I encounter a great deal as a Creativity Coach. There is a sense that as young children we all have the capacity for creative thought and the ability for ‘Divergent Thinking’, i.e., the ability to come up with a range of novel ideas given a certain stimulus. You have probably encountered the kind of thought experiment of coming up with as many ideas for the use of an everyday object such as a paper clip. In fact this kind of experiment is used extensively as a measure of creative thought.

Research has shown the effects of growing up on creativity. In one study the ability to generate ‘original’ responses to the ‘paper clip’ type of thought experiment showed the affect of age. In this experiment (referred to by Ken Robinson in this video) the ‘Divergent Thinking’ capabilities of children aged 5 or less was measured. Compared to typical adult abilities 98% of the children scored at ‘Genius’ level. Two years later the same group of children was measured again. This time only 50% of the children measured at the same level and the decline continued dramatically in later years.

NLP explores the way that our minds become programmed into a way of thinking that can inhibit the way we express ourselves or view our own creativity. Ken Robinson strongly argues that we are all born creative but school teaches us not to be. School prepares us for a world that simply doesn’t exist anymore (see the Ken Robinson Link for more on this).

The story that follows illustrates just one of the ways that teachers (and parents and society in general) can stifle a child’s creativity.

Once a little boy went to school. One day his teacher said; ‘Today we are going to make a picture’.

‘Good!’ Thought the little boy. He liked to make pictures and he could make pictures of all kinds, lions and tigers, chickens and cows, trains and boats. He took out his box of crayons and began to draw.

But the teacher said, ‘Wait’ ‘It’s not time to begin!’ And she waited until everyone looked ready. ‘Now’ said the teacher, ‘We are going to make flowers’.

‘Good’ thought the little boy. He liked to make flowers and began to make beautiful ones with his pink and orange and blue crayons.

But the teacher said ‘wait, I will show you how’. And it was red with a green stem. ‘There’ said the teacher, ‘now you may begin’.

On another day, when the little boy had opened the door from the outside all by himself. The teacher said ‘Today we are going to make something with clay’.

‘Good!’ thought the little boy. He liked to make snakes and snowmen, elephants and mice, cars and trucks and he began to pull and pinch his ball of clay.

But the teacher said, ‘Wait! It is not time to begin!’ and she waited until everyone looked ready. ‘Now’ said the teacher ‘we are going to make a dish’.

The little boy liked to make dishes. He began to make some that were all shapes and sizes.

But the teacher said,’ Wait!’ ‘I will show you how’ and she showed everyone how to make one deep dish. ‘There’ said the teacher ‘now you may begin’.

‘What are you going to make? ‘Said the teacher.

‘I don’t know until you make it’ said the little boy.

‘Any colour?’ asked the boy.

Any colour, said the teacher. ‘If everyone makes the same picture and used the same colours how would I know who made what and which was which?’

‘I don’t know’ said the little boy and he began to make a red flower with a green stem.

Personally I find this story really sad. And it is not just in schools that this kind of process takes place. In my years spent as a creativity coach I can’t tell you the number of times I have adults come to me from classes where they have lost all confidence in their own skills and creative work. Typically they would have been to a class where a tutor has demonstrated a piece that he/she has done dozens of times before. The demonstration is done at speed with a practiced, accomplished hand. At the end of which the tutor turns to the group and says “now it’s your turn”. The class is set an impossible task – it’s like trying to copy someone else’s handwriting. And quite honestly why would anyone want to do that anyway? The students come away often having lost confidence and nowhere nearer to discovering their own unique style and way of picture making that is unique to them.

As an artist myself I know the joy of losing yourself in a painting: a wonderful sense of ‘flow’ where you are at once energised and alert, yet calm and relaxed. You lose sense of time and have a feeling of real pleasure as the work takes shape in front of you. That happens when your work comes from the heart and is a true expression of you. It happens when people overcome the limiting beliefs that have been instilled by the limiting beliefs of others. I love helping people find that place and have over the years developed many ways to help people to discover the kind of work that gives them that personal ‘buzz’.

You’ll find more free information down the right-hand side of this page and you can also follow us on FaceBook.

To find out more about Field & Field and what we do sign up to our monthly newsletter below: 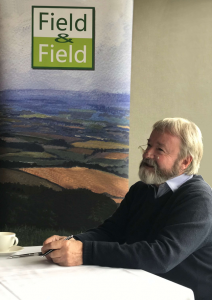